Natural disasters using IoT to check the time and condition of slope failure due to avalanches and landslides. We are conducting research and development of observation equipment. This project has been supported by Yamanashi Industrial Technology Center and Yamanashi Prefectural Fuji Science Institute since 2017. We started this project in collaboration with the following companies

In order to elucidate the avalanche mechanism and solve the problems of existing avalanche observation equipment, the Yamanashi Prefectural Industrial Technology Research Institute Based on the avalanche detection system developed by the Center, we have developed a solar panel module and an impact-resistant A urethane film balloon with a smartphone (infrared camera and various sensors) We are developing a new type of equipment. The device is installed on wooden piles and is blown away by the force of the collapse. The time of occurrence and direction of the collapse can be determined by

We study the aspect of data collection from cameras and sensors and send the data to the cloud. I am responsible for the development of applications that can be used. We have accompanied the team to many field trials in various places, and have been involved in the development of applications and devices that support long-term measurement and enhance functionality. We continue to cooperate with each other by devising and implementing mechanisms.

Recently, we have been seeing a lot of news about natural disasters. In addition, we have actually suffered damage, or someone close to us has suffered damage, so we all feel that this is not someone else’s problem. This is the current situation. Earthquakes, floods and landslides caused by typhoons, volcanic eruptions, avalanches, etc… As long as we live with nature, this will happen It may be inevitable that We can minimize the damage through predictions and monitoring of conditions by understanding the data. However, it is unrealistic to expect constant human monitoring and observation in dangerous areas. However, it is unrealistic to expect people to constantly monitor and observe in dangerous areas.

We want to use the latest technology, the Internet of Things (IoT), to connect the Internet and things, so that little by little our lives will no longer be plagued by anxiety.
The Ministry of Internal Affairs and Communications (MIC) and other local governments in Japan are working to put ICT/IoT to practical use in earnest. It is being promoted. Perhaps there is research and development in your area that incorporates advanced technology Maybe. 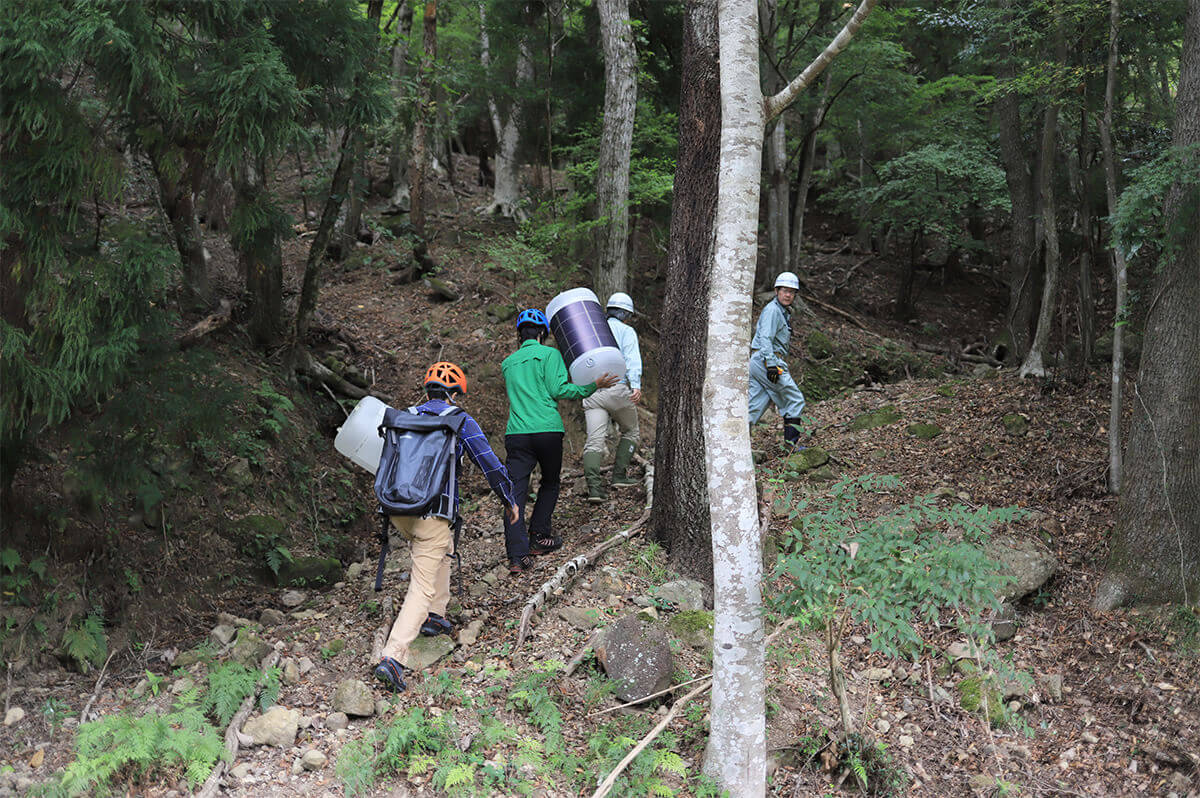 The implementation and operation of a system called IoT requires extensive domain knowledge. We have conducted research and studies on the selection of effective smartphones and sensors, as well as stand-alone power supply units, and have developed a system that can be used in a wide range of applications. I did.

Improvements in technology have made use of sensor-intensive, smart phone devices

Smartphones these days are very well equipped with sensors. The familiar “GPS sensor” can provide current location information by determining the distance from GPS satellites. The “accelerometer” allows you to know which direction you are moving in. You can also use the gyroscope to find out the tilt of your smartphone.
Also, the “gyroscope” allows you to know the tilt of your smartphone. This is a term you’ve probably heard a lot lately, since it’s also installed in game consoles.

Android terminal “Cat S60/S61” installed in the IoT natural disaster observation device sends data periodically via internet such as LTE, including photos of the place where the device is installed and information from the aforementioned sensors (images, movement distance, acceleration, tilt, etc. using infrared camera).
In addition, the μPRISM is connected to a smartphone to complement the sensor, and the position of the device can be determined by the inclination of the smartphone and the inclination of the μPRISM embedded in the stick.
However, as we are located in the mountains, there are cases where the Internet is out of service. In order to be able to cope with such cases, we have made it possible to retain the data until it is collected, or to actually Plant a beacon for search and retrieval in the event of a landslide, avalanche or other disaster. strong> and other creative ideas.

Of course, there is no power supply in the mountains. Therefore, in order to support long-term measurements with a self-supporting power supply, we have developed thresholds for sensor data measurement and measurement Various means of adjusting the spacing, utilizing photovoltaic panel modules, installing batteries, etc. It was decided to take a
This device is inserted into the ground with a wooden stake during the experiment, but in national parks such as Mount Fuji, where the recovery of non-natural objects is essential, the device is equipped with a smartphone and battery with a power supply and sensors so that it can be observed and recovered as an independent device.

In addition to the various sensors, we have developed a thermal imaging camera that uses an infrared sensor. We are researching this using the app and the cloud. One button to set thresholds and intervals and to know if sensors etc. are active or not. Our priority was to place it on the screen and make it easy to use and understand.
Our designers also designed the icons. We repeated the test many times and sometimes struggled with the glitches of the SDK. Our engineers are still improving the app to make it easier to use. 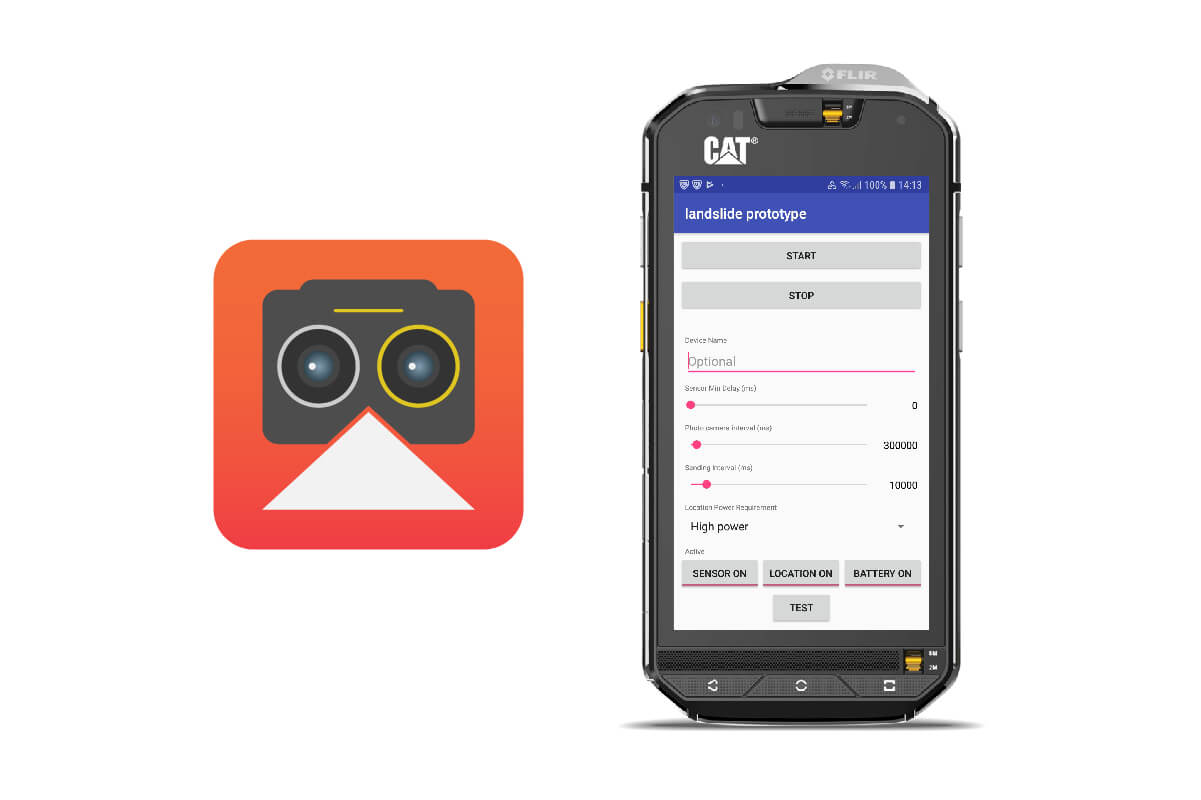 Demonstration experiment for practical use and future

The observation equipment was installed in the mountains of the test site after receiving permission from the Ministry of Land, Infrastructure and Transport to enter the dangerous area. Fuji and Kusatsu in Gunma Prefecture. We have already conducted experiments in Niseko, Hokkaido, with an artificial avalanche, and in Kusatsu, Gunma Prefecture. We have been conducting a series of field verifications in various locations, including avalanche observation and landslide disaster observation in Izu City, Shizuoka Prefecture.
Please take a look at that time of occurrence and collapse method, a news article on the time we accompanied a landslide disaster observation demonstration experiment in Izu City, Shizuoka Prefecture in October 2019, and “I accompanied the IoT natural disaster observation device field verification under joint research with Yamanashi Industrial Technology Center” on our website.
In the future, the company plans to conduct demonstration experiments in a variety of locations and situations, such as a drone test of the device in snowy mountains. We are here. We are planning to update our news articles when we accompany you, so please keep an eye out for future developments. We hope you will do so.

Cooperation in incorporating the latest technology into municipal research is a great contribution to society for us.
Elucidating the conditions and mechanisms of natural disasters will be a big step for society as a whole. It is also a great opportunity to make use of technology from the field of disaster prevention, which is the study of natural disaster observation equipment, in a different field. We will continue to accumulate data and methods through repeated experimentation and improvement, and will do our best to work on mass production prototypes and to cooperate in research and development for practical use.

We will continue to accumulate data and methods through repeated experimentation and improvement, and do our best to work on mass production prototypes and to cooperate in research and development for practical use.

Consult on the use and development of IoT
Tweet
TOP PAGE →