Research and development of the “Phyllostachys berry detection system

From 2015 to 2018, we cooperated with the University of Yamanashi in the research and development project of the “Peach cinquefoot moth damage detection system” in collaboration with the University of Yamanashi.
Furthermore, we made use of our total support system, which is one of our strengths, to help with promotional measures such as exhibiting at various exhibitions, producing flyers and videos.

The office of our digital production factory4 is located in Kofu City, Yamanashi Prefecture.
Yamanashi Prefecture boasts the largest harvest of peaches in Japan.
Although the peaches are popular in Japan, they are now being exported to other countries as well.

In 2010, during import quarantine in Taiwan, a pest called peach cinquefoil was found in the peaches produced in Yamanashi Prefecture, which led to the suspension of imports of the damaged fruit of the peach cinquefoil from this prefecture.
This pest is a type of moth that lives on fruits other than peaches, such as apples and pears.
In particular, the larvae burrow into the fruit and their feeding holes (the holes they enter) are small, making it difficult to determine whether or not they are a parasite from the outside.

The suspension of imports was lifted in the same year on the condition that Japan’s export quarantine was improved, but in order to achieve a fundamental solution to this problem, it is necessary to establish automatic foreign object inspection technology for the inside of peaches, which cannot be done visually, and to dramatically improve the conventional inspection system.
In the past, this inspection has been carried out manually, such as by fruit pickers, but we must also work to improve the efficiency of this inspection system for future export expansion. 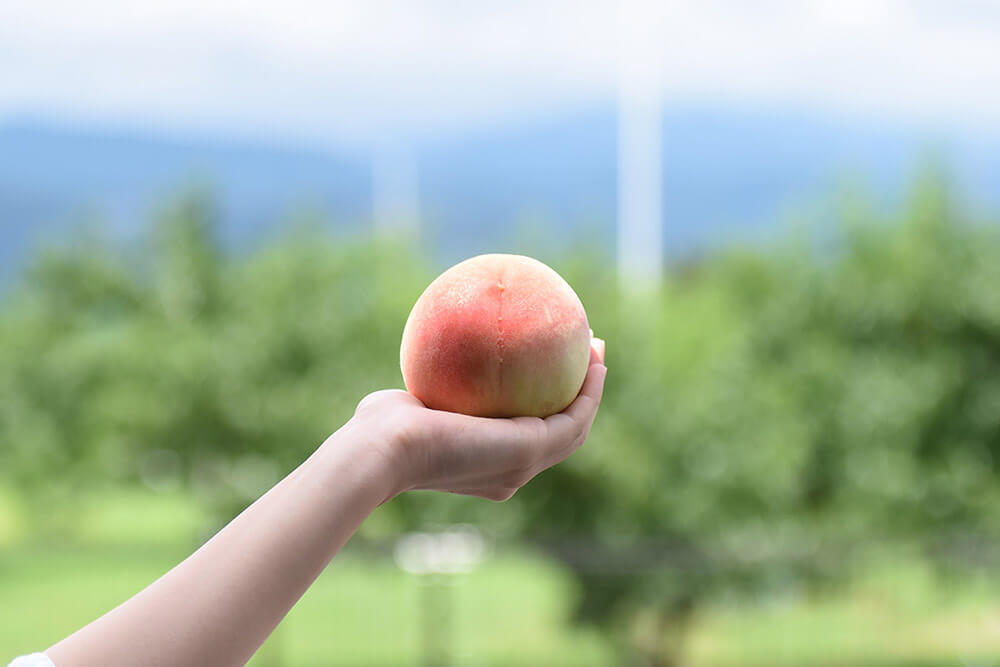 Thus, in order to effectively detect the damaged fruit of peaches using advanced technology, we started a research project on “Peach Pinworm Detection System” mainly at the University of Yamanashi.
We were mainly involved in the design of the inspection equipment, development of the interface application, and construction of the mobile remote control system.
We also accompanied and supported the demonstration study conducted in various places in Yamanashi prefecture and in Fukushima, where peach cultivation is very popular.

Product design of inspection equipment chassis with emphasis on UI/UX

The material is stainless steel, which is effective in preventing metal leaching and rust contamination. We thought it was the best material for food handling equipment because it is hard and durable.
The slit on the side of the case is slanted parallel to the slope of the screen on the front, for example, to create a simple and beautiful case.

First, the eggs of the peach cinquefoil laid on the side of the peach are blown off by air and preliminary inspection is carried out, then the eggs are placed in the stainless steel inspection system housing, and after starting from the touch panel, X-rays are irradiated inside and images are taken from multiple directions according to the shape of the peach seed.
The X-ray images are processed and recognized by the peach cinquefoil detection algorithm to determine whether or not the larvae have pores, which makes it possible to detect the damaged fruit.
Damaged peaches that are determined to be damaged by this inspection follow a different route than those that have passed the inspection. The peaches are returned from the inspection equipment and are thoroughly checked to ensure that they do not proceed to the physical shipping process.

Next, the peaches that have passed the inspection proceed to the next process of fruit capping and boxing. Here, the peaches are held and rotated without damaging the peaches, which is The robot is equipped with the flexible handling technology that was used.
In addition, many advanced technologies are used, such as measuring the size of the peaches with a 3D stereo vision center and aligning the suture lines so that they look good when the box is opened.

The development of this inspection system, which, thanks to automation, completes the preparation for shipping without any human intervention after inspection, has reduced time by more than half or more than half compared to conventional inspections, making it more efficient.
In addition, the results of the 2018 verification study showed a high detection rate of 100%, and we continue to make steady progress toward commercialization.

A mobile remote control system for inspection equipment allows for stand-alone operation of the equipment, but also allows for IoT devices The data can be checked remotely through the cooperation of the Data is accumulated and can be checked for past fruit history and other data, and can be linked to the inspection system. You can also manage it by

If the test results are recorded as data in parallel with the inspection, they can be used for future research. It is believed that this can be done. Even if more than one device is in operation, the data for each can be summarized, and the data can be used to determine the type and classification of the peaches. The number of damaged fruit can be used to identify trends.
This data can be used for researching the introduction of more efficient equipment and for improving the equipment itself, as well as for advancing research on peach and peach cinquefoil cultivation by using AI and other technologies.

Flexible total support from research and development to promotion 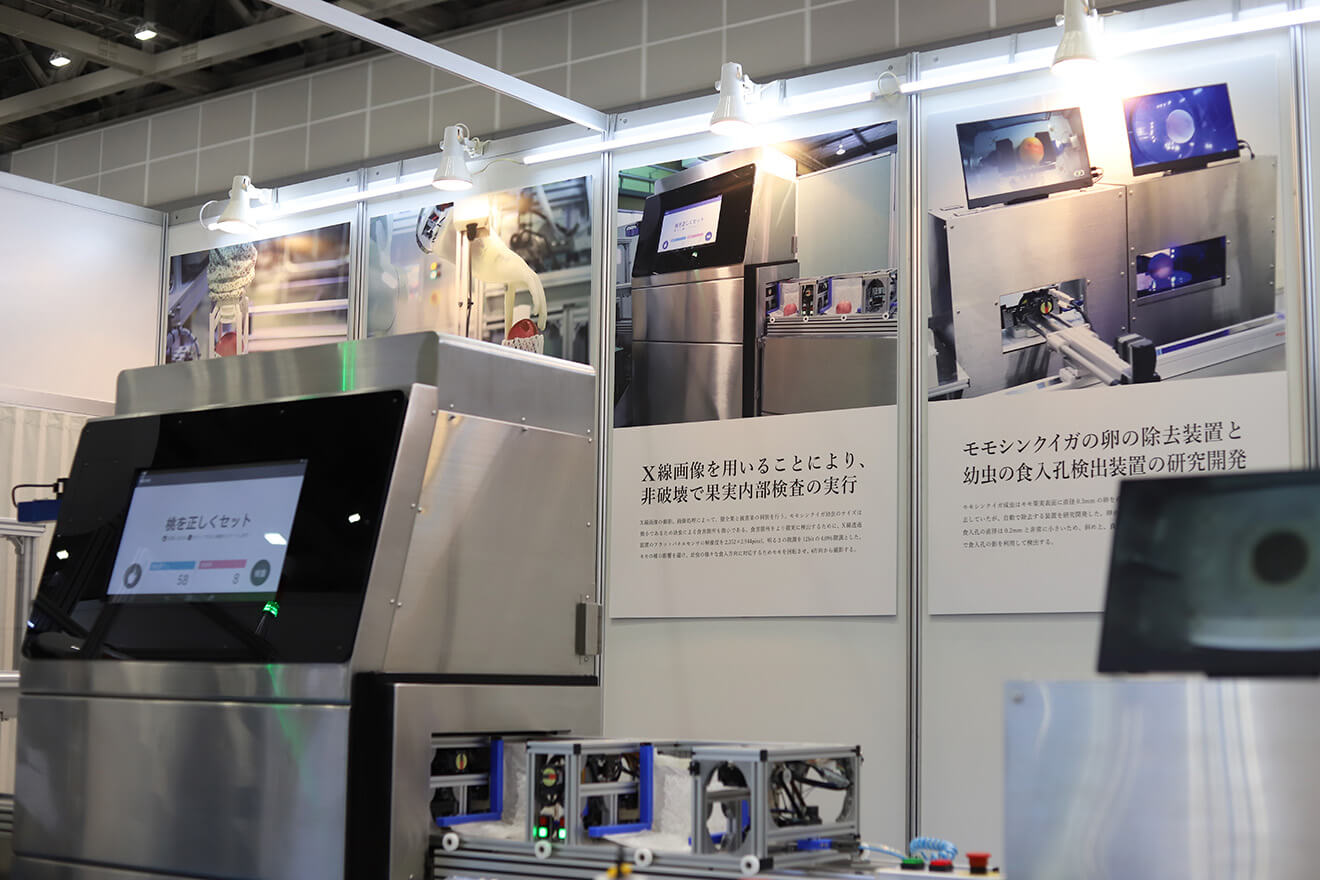 For the promotion of this project, we were able to continue to help with space production and support at exhibitions and events from 2016 to early 2019, as well as photography and video production for advertising.

The University of Yamanashi participated in the “Agribusiness Creation Fair” hosted by the Ministry of Agriculture, Forestry and Fisheries (MAFF), as well as the “iREX International Robot Exhibition” and the “Robotex Robot [Development] and [Application] Exhibition” to promote our project.
We produced the space for the exhibition booth from material selection to design and layout. We set up the booth before the exhibition and provided support during the exhibition. Promotion at the exhibition, including explaining the equipment to visitors to the booth It was a good experience for me to be able to devote myself to activities.

Video and poster panels, which are indispensable for promotion at such exhibitions, and Flyers. Used effectively, they can be effective as an eye catcher or a more in-depth project It plays an important role in getting people interested in the project.
Our designers were involved in this project as well, from photo and video shooting to editing and completion.
We went to Skuse Co., Ltd. in Kyoto for filming and interviewing, used drones to shoot footage of the peach fields, and prepared foreign language advertisements for the overseas market. 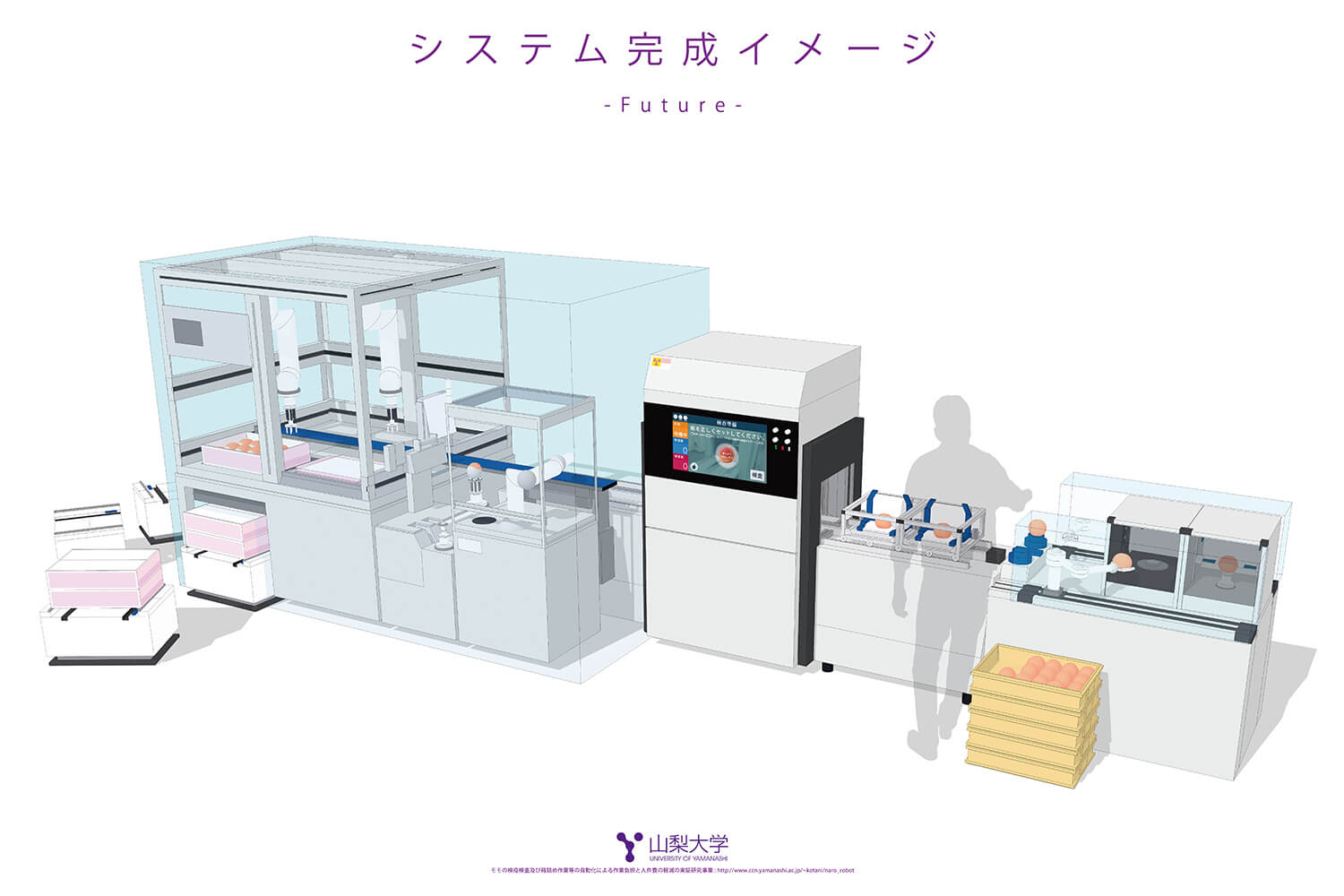 We are glad that our project has been recognized by many people through these promotions.

Revitalizing Agriculture through Agri-Tech that Utilizes the Latest Technology

In this way, we think about how much we can do within a limited budget, and then we do everything from planning to design and development. We have contributed to the project with a heavy emphasis on UI/UX design. In addition, we have continued to collaborate on research and development as well as promotion, which has allowed us to reach a large number of people with this I think we’ve created an opportunity for people to get to know the project.

If this equipment can be applied to the inspection of other fruits, such as apples and pears, where peach cinquefoil can be a parasite, it will not only increase the export of peaches, but also revitalize the Japanese agriculture.
There are many possible benefits, including increased efficiency through time savings and personnel reductions, improved reliability and convenience of the equipment through technological advances and collaboration, and increased profit margins for farmers.

Today, the word “agri-tech,” which combines the terms “agriculture” and “technology,” is gradually beginning to reach our ears.
Technology has made it possible to streamline a variety of agricultural tasks, such as robots that automate crop harvesting and IoT-based field security devices.

Pest damage, like this one, is also a major issue related to imports and exports, and all people should be able to enjoy safe and delicious crops. I feel that further development is necessary so that we can eat. There are many problems such as the aging of the farmers and the decrease of the farming population. I believe that there are many areas where we can help with the power of the latest technology.
I would like to use this experience to continue to play a role in this area with our knowledge and the latest technology.